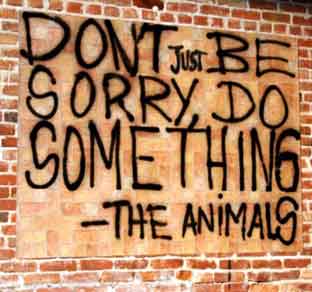 Rolling Stone is a magazine widely known for their articles on movies, television, politics and music. Each article offers insight to the topic and, to me, is always beneficial.

However, one article in particular had an extreme effect on me. In the Belly of the Beast by Paul Solotaroff is a chilling article giving insight into the horrendous lives of both the workers and animals at a processing farm. Solotaroff tells the tale of animal rights activists who went under cover in order to infiltrate the meat farm and reveal the ungoings behind closed doors.

Imagine a farm with wide open spaces, green grass, a blue sky and sun shining in every direction.

Imagine a piglet waking up in the morning and stumbling over with his wobbly legs to greet his mother who is soaking in the sun and mud.

Imagine that little guy being able to grow up big and healthy with his parents and siblings by his side and being fed every day with all natural and organic foods.

Imagine him running around on a farm and greeting humans with happy and loving nudges on their leg with his snout.

Imagine that pig reaching a mature age and being humanely, and painlessly put down in order to provide the human population with healthy and natural meat.

This is not the world we live in…this world is filled with torturous and horrendous means of producing processed meats just for the human population to be able to have the luxury of digesting McDonald’s Big Macs while in the midst of their drunken munchies.

“In the Belly of the Beast” uncovers the blood-stained veil and reveals the reality of exactly how meat goes from the animal, through the processor and into our everyday lives.

The animals who are giving up their lives in order to satisfy are carnivorous needs are treated as if they are parasites. They are beaten and neglected to the point of death.

They are forced to live for years in cages that are too small for them to even lie down and their facilities are never cleaned so they have to endure a lifetime being covered in their own fecal matter.

The cows are made to produce nearly 22,000 gallons of milk a year, that’s over 120x more than the requirement in 1972. The article states that the cows can handle around 4 years of this abuse before they tire-out and their legs break beneath them. When that happens, the workers kick the cow or shove a fire hose down their throat until they stand up. And when that does not work the cows are electrocuted; if that doesn’t get the job done then they are hung upside down and their throats are slashed. In just one slaughter house in Nebraska, nearly 2,500 cows are killed a day using this method.

But that is not the most alarming part of this procedure. Congress has approved this means of slaughter, as it is stated in the Humane Means of Slaughter Act.

Humane? Yeah, okay. Maybe that should be the process used to put pets asleep too. Since it’s “humane.”

This does not even cover half of what animals in slaughter houses are put through every day. Piglets are ripped away from their mother the moment they are born and then their tail and genitals are immediately cut off while the piglets are screaming to be reunited with their mom.

However, this is not meant to stop people from eating meat. It is meant to make people understand that there is a right way to go about getting it.

“You say you want a revolution…”

This article written by Solotaroff proves just how influential and powerful the voice of a journalist can be.

I did not visit a slaughter house, I did not witness a piglet being torn away from it’s mother and I did not see a cow being hung from his ankles and watch as his throat was slit and his body chopped into pieces.

I could not bare to watch more than 10 seconds of the videos and I attempted to scroll past the photos as quickly as I could. Why? Because I did not need to look at them. The words alone were enough.

This article shows how revolutionary journalism can be. After reading, I never want to eat meat again. Unless I do in-depth research on where this meat is coming from. This article CHANGED MY MIND and OPENED MY EYES.

This article made me angry and brought me to tears. Tears from rage and tears from sadness. How dare anyone say that words and telling a story is not as influential as taking action, that writing your thoughts down won’t bring about change. If not for “In the Belly of the Beast” I would not have known that action needed to be taken and change needed to occur.

For the most part, people know that animals in slaughter houses are mistreated. But no one cares to look into it. They prefer to stay ignorant because that way they cannot be held at fault.

But when the problem is right in front of you, on a screen accompanied by photos and videos, then it is a crime to ignore it.

click here for an additional video of the grotesque lives of the animals in slaughter houses.

“If slaughter houses had glass walls, everyone would be a vegetarian.” -Paul McCartney